We entered seven cats for this show which was held on 14 April 2012, the biggest group ever for Lagenda Cattery - three adults, Putra (Champion category), Citrus (Open category) and Boboy (HHP category) and four kittens, Addy, Shah, Tuksido and Muezza (kitten category). Oh boy, it was too many for me, Sara and Liza to handle so we roped in two of my nephews to assist as photographers and general muscle power and a few of Sara's friends to assist in keeping a look out to ensure that we don't miss the call to the ring.

Let me say up front, my cats are all RWs (Roowina's Winners) so if they actually bring home a ribbon, it is a bonus. This time round, we entered just to see how our kittens perform. :)

But am really proud to say, all the Lagenda kittens (the Ciku-Kiwi team also showed Mega) performed very well at their first foray in the rings. They played with the judges and relatively had more fun than their keepers. Three of my kittens, Addy, Shah and Muezza were in the same colour class with two other fantastic kittens from Felis Wonder and ZMC. Boy, for sure you know who got the no. 1 spot so our kittens had to fight for the no. 2 and 3 spots. The only photo that was missing is the picture of Addy and his no. 3 spot in his colour class, beating his other siblings as well.

Really, really proud day especially when Muezza made it to the finals to get his first ever ribbon at 10th placing. We were informed that he is now listed at no. 44 in the kittens category Online Almanac for Asia. Whatever that means, we are very proud considering that it is their first show.

At Rob U'ren's ring, Tuksido got an "honorable" mentioned as he was Rob's fifth best maine coon kitten even though there's no ribbon for him. Thanks Rob, for picking him. We hope that he will do better at the next show.

The best surprise I had was when Putra won Best Champion and 2nd Best of Breed in one ring - thanks Yaeko Takano for looking beyond his timidness at the ring. I was really, really surprised as I did not expect to win AT ALL coz all the other cats were gorgeous! He also managed to get 2nd Best Longhair Champion and went on to win the 3rd Best Overall Champion! Based on his performance that day, he now has 39 GC points! 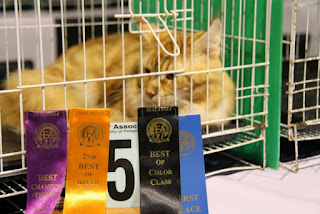 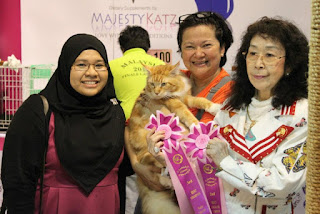 Boboy also did very well, winning 2 no. 1 spots and 1 no. 2 spot and although he did not win the Highest Scoring HHP like last year, I am proud to say that he actually beat some of the pedigree cats in the HHP category. 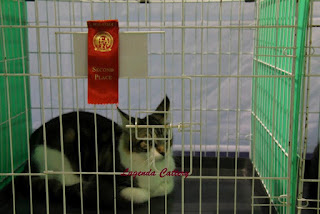 Citrus came home with 2nd placing in her colour class but she charmed all the judges to get her Champion title. She is now retired from the show hall for the time being to concentrate on our breeding programme. We hope that one day, she will get her DW title (no harm dreaming right?).

So was it worth it spending all that money to enter the seven cats plus the grooming - You bet! It was fun, tiring but above all, satisfying that we managed to enter all our kittens and they did well IMHO. Kudos to Jimmy and Nancy and the rest of the Organising Committee for a very well run show. So are we going to enter again? - a big Yes!