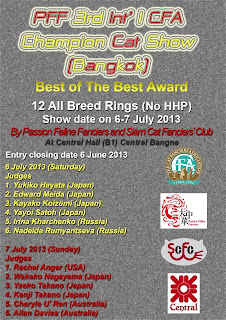 We brought Muezza and Ike to their first international show for this season at the PFF 3rd International CFA Champion Cat Show held in Bangkok from 6 to 7 July 2013.
The event hall was nice and roomy, with lots of space for the exhibitors. Although it was initially warm as the aircon was not switched on, the room was airy through out the day and there was a spot right in the middle of the hall whereby if you talk, everyone in the room can hear you - very good acoustics :))

The Lagenda team did reasonable well, Muezza granded on the first day and went on to the second day to compete as a grand. Suffice to say, he was good enough to final as one of the top five premiers to be selected for the Best of the Best award at the end of the show. Of course he did not win the Best of the Best award but we were ever so proud of this boy of ours, he brings much honour to our cattery by granding in one show in Bangkok last season and again granding in Bangkok as a premier (although in two shows). And he also received a Judge's ribbon from Allan Davies (our first!).