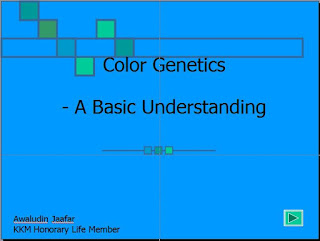 The Feline Lovers Facebook Group successfully organised their first ever Get Together and Tea Talk on Cat Colour Genetics on 2 June 2012 at SWAn office in Glenmarie Accentra, Selangor.

The speaker, Mr Awaludin Jaafar, a retired telco engineer (previously with Maxis Bhd), is well known in Malaysia as the leading expert on FIFe Colour coding and genetics. A member of the Malaysia Cat Club (MCC) since 1987, Awaludin served as the Club Secretary and Registrar from 1991 to 2003 and went on to serve the MCC as President from 2004 to 2006 and is currently an Honorary Life Member of the club. He passed the FIFe Judging Exams in 1993 under the supervision of the late Mrs Alva Uddin (Sweden), who was also FIFe and World Cat Council Presidents. He had attended various FIFe's Judges Seminar and Conferences and had also given and organised various talks and seminars to members of the MCC and cat fanciers alike on topics ranging from cat care and grooming, cats - in the eyes of a judge, show and judging rules and colour coding and genetics.


A total of 31 people attended the talk which far surpassed my target of 20 pax. Two of my friends came with their family but the children also enjoyed the get together as some of us brought along some cats to the event. Obviously Putra was present and also my two HHPs (Dusky and Boboy), Yati brought along her sphynx whereas Aldric brought his beautiful Tiger (DLH). Everyone took the opportunity to take photos with the cats although some were scared of Putra due to his size (LOL). Of course, there were the minor incidences of Putra pee peeing in the show tent (sigh!) and also Tiger escaping from his show tent (twice! Double LOL) but it was a lot of fun for everyone.

We had to stop the talk at 1.20pm due to a technical error (I accidently switched the projector off and we could not reconnect to the notebook) and also it was past lunch time and everyone was hungry. However, Awaludin was nice enough to stay until after 2.00pm to talk and discussed further with the group. 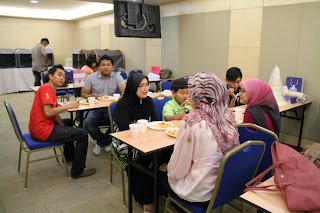 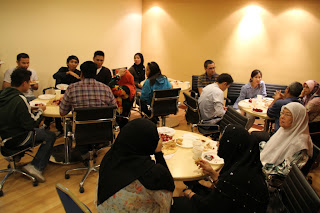 The cats on show :


The event would not have been as successful without the audience and of course not forgetting the door gifts (typically Malaysian) and the lucky draws. We would like to thank the donors Azmi D. from Sebare Pet Shop for the cat food, Norhayati Zakaria for the lucky draw presents and Hairri/Afza for the delicious red velvet cat cake (yum yum!). And finally, we would like to thank SWAn for allowing us to use the facilities and also provide some of the door gifts as well.

All in all, everyone had a good time and we hope to organise another get together in future.

More photos of the event