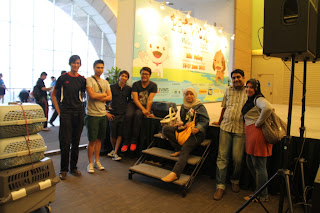 The KKM-FIFe International Cat Show was again held in conjunction with the 5th International Pets & Aquatics Exhibition (Pet World Malaysia), held at Mid Valley Exhibition Centre on Sunday 17 June 2012. Pet World Malaysia is held annually and is normally held over three days. Besides the KKM-FIFe International Cat Show, there were other activities organised which include a Dog Show by the Malaysian Kennel Association, Rabbit Beauty Contest by Beh & Yo Rabbitry, Malaysia's Smartest Toy Dog Competition plus some talks on animal care and games for the visitors.


For this event, we fielded Putra in the Adult Category (to get his third and final CAC in order for him to obtain his CH title under FIFe) and his boys, Shah, Tuksido and Muezza under the Junior Category. Unfortunately, due to an eye infection, we had to withdraw Tuksido at the last minute. Mastura also entered Addy whereas the Ciku Kiwis also entered Mega so on paper, all five Lagenda Litter A entered the competition (again) :). A total of 158 cats were registered for the competition, 74 nos pedigrees and 84 nos HHPs.

Suffice to say, all of us had a lot of fun. The items on sale during the event were mind boggling and most were being offered at a special rate. We came home with canned food for the cats which (unfortunately) will last only for a month due to limited supply but it was worth it.

Am still contemplating to buy the bath tub and the dryer but currently, the budget won't allow. Sigh..... :).

We were pleasantly surprised that Shah won the Junior Semi Longhair Category with Muezza coming second. All four Lagenda Litter A received EX1 awards. I was so proud, I could burst! The only one missing was Tuksido. Sigh, you can't win them all. :) :) :)


The best news of them all was that Putra won the Semi Longhair Category and went on to win the Best In Show!!!!! Wow, my baby won, my baby won, my baby WON!!!! That red and white scare-wetty cat who thinks he is still a baby coz Mummy treats him like one is the BIS for this show!!!! If I could, I would have done a cartwheel but since I am already 50 and overweight to boot, we just jumped and screamed!


He has earned his third Champion title, one each from CFA, TICA and now FIFe. Very proud of him.

Thanks KKM for organising the event and to Mrs Marilyn Larcombe from Australia, thank you for choosing our Putra as your Best in Show, it really, really, really made our day!