Introducing a new cat to your house

We picked up Pearl the day after meeting Yati and her amazing Api-Api and Jebat Arjuna. Initially, I wanted to forget about Pearl (and the deposit) after seeing a show quality cat but upon seeing her again, I couldn't do it. I could not leave her there sharing a small cage fit for one. Oh dear! So we paid the balance and brought her home.

Upon reaching home, I placed Pearl in her carrier on the table in my bedroom next to where I had placed the two boys (in the family area). I had read from the internet that you need to introduced new cats slowly, ie not to just put them together but to isolate them first. So my intention was to place her cage in my bedroom for about a week before introducing her to the two boys.

Imagine my surprise, even while I was setting up her cage, the first thing Dusky did was to quickly enter my room, give the carrier a cursory sniff, then sniffed out Pearl and that was that. He then happily left my room (no signs of aggressive behaviour). I took out my phone but could not take any photos as the phone decided to go west and had to do a reset to reactive the phone. :(

Boboy did the same thing but he first sat in front of the carrier and looked at Pearl. Then the customary sniffing session and then it was back to business of playing with Dusky. Pearl just sat there, like the Princess that she is, and lapped up all the attention. And she was purring, the naughty girl!

Maybe it was because she was a girl and was in the carrier, thus presenting no threat to the two boys. But then again, she was on an elevated position. Hmmmm......

Anyway, in view that I had already spend beyond my budget on the kittens, that night I had decided with much regret to inform Yati that I will not be getting Api-Api after all. :(( :(( :(( 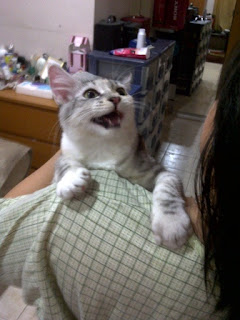