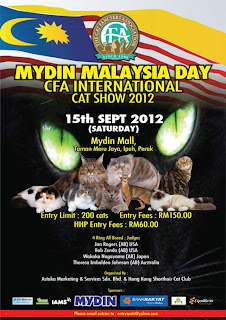 The Mydin Malaysia Day CFA International Cat Show 2012 was held on 15 September 2012 at the new Mydin Mall in Ipoh, Perak. The judges were :
Initially, we were reluctant to attend in view that it was held more than 100km away from home. But after much consideration and in view that internationally recognised shows are few and far in between, we've registered Putra, Tuksido, Ike and Bianca for the show. However, just before the deadline, we found out that Bianca was pregnant so we substituted Muezza for her and also added LegendaryBoboy at the last minute as our only HHP entry.

Unfortunately, three days before the event, we had to withdraw Ike due to an allergic reaction to the shampoo. Then a day before the show, Putra had to be withdrawn as he also had an "accident", either someone bit him on the neck and scored some hair resulting in a small bald patch, or he had scratched himself silly and managed to give himself a small bald patch. Sigh, there goes RM300 down the drain.

Enough groaning, nothing can get back the RM300! Since there were only 3 cats (Muezza, Tuksido and Boboy), we decided to drive to Ipoh in the morning instead of going a day earlier as it was only a 3 hours drive to Ipoh. Was the trip worth it? You bet!!!! We had fun all the way, and came home tired but satisfied with our babies' performance. 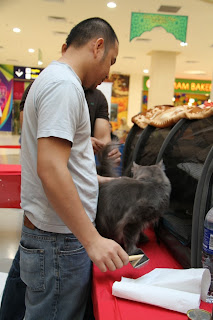 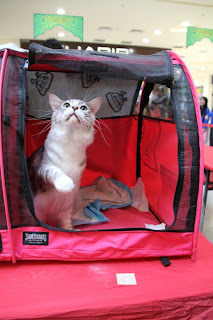 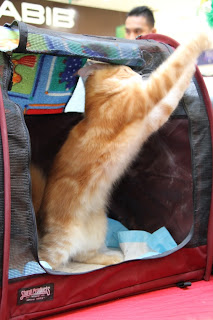 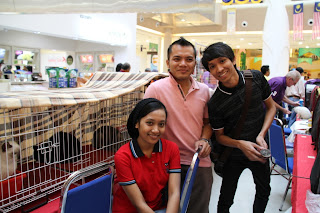 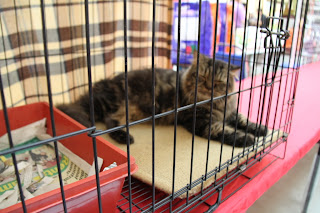 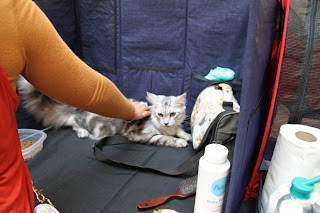 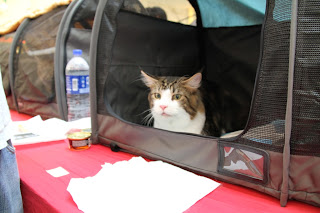 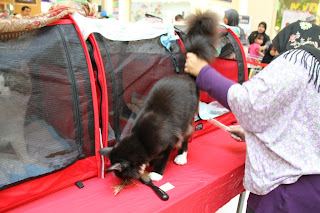 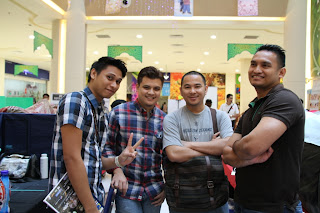 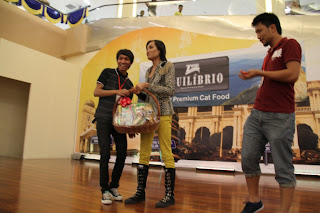 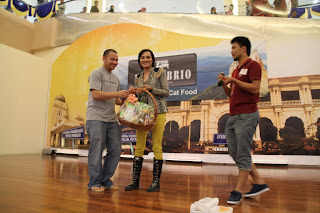 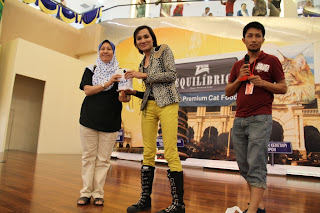 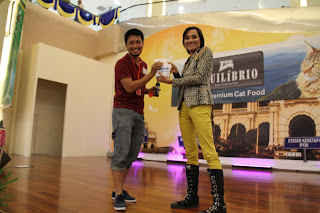 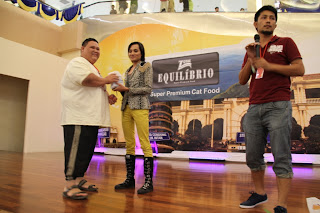 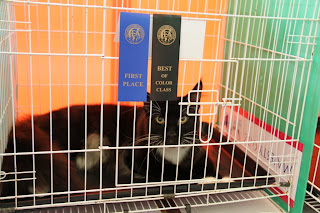 CH Lagenda Tuksido Putra did as well as expected, getting best in his colour class and was honorably mentioned in Wakako's ring. Although he did not get any rosettes, he performed well in the rings. Never mind baby, you are still my star youngster in terms of size. Maybe you will do better when you are older when your face developed further, the same as your dad Putra.

Our best performer was our last minute entry, LegendaryBoboy! He was 1st in Bob Zenda's ring, 2nd in Jan Rogers' ring, 5th in Wakako Nagayama's ring and 3rd in Theresa Imboden's ring and came home with the coveted Highest Scoring HHP rosette! Way to go my LegendaryBoboy! Mummy is soooo absolutely proud of you!


We would like to thank the judges for using our cats in the finals. And to the organising committee, kudos for a well run show. We had fun, especially those who won the lucky draws and the door gifts were just fantastic. It was a simple thing but it is highly appreciated. We will definitely be joining future shows organised by Mydin, just for the door gifts (he he he).

Last but not least, to the Feline Lovers Group, thanks for your support and making the trip worth the while!