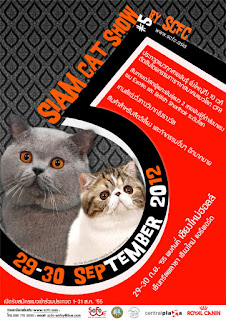 Our adventure in the feline world continues. This time, we went to the 10-Rings Siam Cat Show #5 held in Chiang Mai, Thailand from 28 to 29 September 2012. The event, organised by the Siam Cat Fancier's Club, was held at a very nice shopping mall, the Central Plaza Chiangmai Airport. The judges were :

We arrived a couple of days earlier, just to make sure all the cats are well rested before the show. We stayed at the gorgeous Airport Greenery Hotel, Chiangmai. We took the one-bedroom apartment whereas the others shared the two bed-room apartment. If you ever want to stay in a reasonably priced hotel which is clean and has staff that can speak in English, I would honestly recommend the Airport Greenery Hotel. 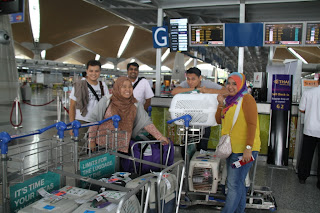 
Unfortunately for us, things did not go as well as planned. When we registered for the show, both Kanang and Muezza had yet to grand, we only knew after the Ipoh show. So on the first day, I went up to Dick Kallmeyer, the Master Clerk, to inform of the changes. Nevertheless, in his first ring (Allan Davies), Muezza was awarded the Purple ribbon for best champion. Allan was not very pleased when I had to return the ribbon, I was happy that he thought Muezza deserves the purple ribbon but was very upset that he was not judged in the right category. Sigh. When I checked with the list, Dick had corrected Kanang's entry but not  Muezza's. :( Anyway, I went around to the other four rings and informed the ring clerks of the changes but again, at his second ring in Peter Vanwonterghem's ring, he was again awarded the purple ribbon! It was really, really a bad start! The ring clerk did not inform Peter so Muezza was again not judged as a Grand Champion. I went around again to the remaining rings, this time I checked the judges list myself, just to make sure there were no more mistakes. The good news was that he went on to final in two rings but I believe the damage was done.


On the second day, we fared better. And the best news was that Tuksido even managed to get the purple ribbon and went on to win the 3rd Best Longhair Champion in Theresa Imborden-Johnson's ring! His first ever ribbon and rosette! Mummy is so proud of you baby!

The others also did very well with Kanang finalling in 7 of the 10 rings, Gerbil Jr in 6 rings, Chunky in five rings (but was pulled out after he had granded (open to grand one show!) to give others a chance to grand), Barney in ALL rings, Maybelline was 2nd Best Champion and little Awan also managed to final. But the best news for us is when Carlos managed to grand with lots of points to spare! With his win and Chunky's, his dam, Mizzou has won the Distinguished Merit award - woweee!!!!! Congrats to all.


Regardless of the initial hiccup, we really, really enjoyed the show. Thanks to Rung and all the organisers of the event for a well organised show. We love the hall, it is big and spacious, with enough space for the sponsors and exhibitors alike. And thanks to the judges for using our cats in the finals. And the best thing about shows are meeting up with fellow cat lovers and also making new friends. Still, I remain a very big fan of the maine coons although the other breeds are just as fantastic.

Finally but not least, a big thanks to all the FLG for your support and making the trip really fun and eventful.