Last weekend was a really hectic one! The KKM had organised two Cat Fun Show, one with the MBPJ at Taman Tasik Kelana Jaya, the other with Mydin USJ. We had initially registered 3 of our cats to join the Mydin USJ event which was to be held on 26 June but had to participate in the MBPJ event in view that our friends were the co-organisers. He he he, it was fun, fun, fun! Thanks KKM for hosting such a good event. 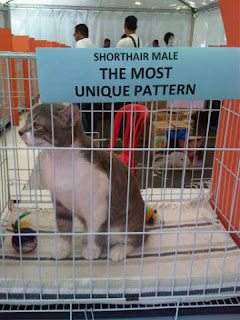 We entered Dusky and Putra for the MBPJ event and surprised surprised, Dusky won the "Most Unique Pattern" in the short hair category! Mummy is soooo proud of you Dusky. This is despite of the fact that he was hiding under the mat almost throughout the whole show!
Putra did not do very well at his first show. He was scared stiff, curled up at one end and trembling/shivering most of the time. We placed him next to Lady, a very pretty girl, but he was not interested! Hmmm, anyway at the end, he relaxed slightly for a sniffing session with his half brother, Tempe. 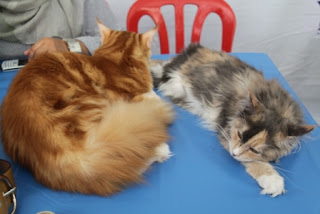 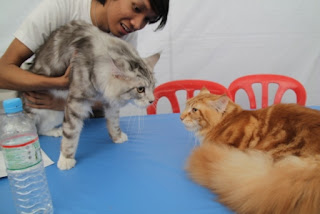 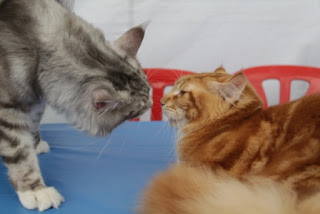 In all, it was good, wholesome fun filled day!
Photo link
Link to Part 2
Posted by RMerican at 08:44