The story of Jebat...

A few days after the Petknode fiasco, we decided to follow the KTAJ's group to round up or rescue stray cats near the Petknode office in view that there were still owners looking for their cats. Although we did not manage to catch any of the cats seen at the area, the main group managed to rescue more that 20 cats that night. KTAJ informed those present that night that we could foster the cats for two weeks giving the owners time to claim their cats before putting them up for adoption. So that is how we ended up bringing Jebat home that night. 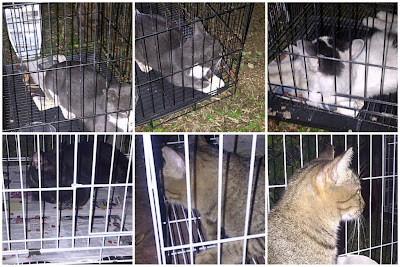 We were very apprehensive as we have five cats at home, all of them placed indoors. Based on advise from some friends, we quickly cordoned off the drying area behind our kitchen and placed a cage there for him. We named him Coco initially in view of his colouring. We were told that we are to foster him for two weeks and KTAJ will advertise for owners to claim the cats before returning him to KTAJ for adoption.

Since we took him home in the middle of the night, we could only bring him to the vet for a check up the following morning. Thank goodness, apart from a forehead scratch, he was fine. We were advised by the vet to keep him separated from the rest for at least two weeks in view of the potential infection so in the end, we decided to keep him where he was.

Coco was a very loving cat, he loves to come up to your legs and snuggle. He does not try to run away even though we let him out of the cage whenever we are home so it makes me think that he used to belong to someone who loves him as well. Maybe he is a runaway or maybe not, we will never know as no one came forward to claim him.
Two weeks later we contacted KTAJ on the next step in view that no one had come to claim him. We could not join the main group to neuter him so we took him to our vet for neutering.

One of our friends also had indicated interest in adopting him so we asked her to contact KTAJ. Suffice to say, everyone was happy with the arrangements so in the end, after almost 3 weeks with us, with a heavy heart, we had to let him go to his new home. Liza was especially upset as she had grown very attached to Coco.

He is now known as Jebat Hebat or later to be renamed Jebat Bentayan. Thank you Linda for taking care of him. We hope both of you a long and happy relationship.