Remember Amber? She is Pearl's twin, the other kitten that I initially wanted to buy but Pearl jumped up first :). When I first saw Amber way back in February 2011, she was bigger than Pearl. We visited her a few times since then. But during our last couple of visits to see her, she looks a bit smaller and thinner. We were informed by the breeder that she lost weight as she had just had her "on heat" cycle whereby she normally eats less. Poor baby, her fingers were dirty and she looked so bedraggled! But when we went back a couple of days later to take some photos, she had been cleaned and her nails had been clipped. 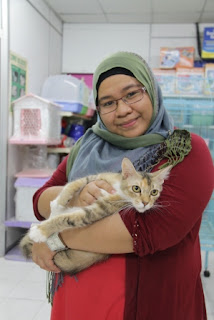 Her face looks bigger than Pearl's but her body seems slightly shorter.

We also took some photos of other maine coons at the shop. See photos
Posted by RMerican at 06:57